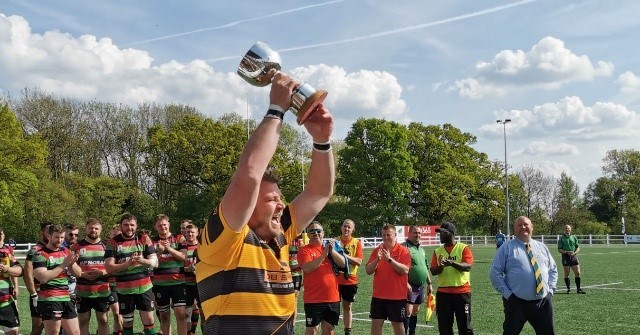 The final scoreline of 47 – 30 may suggest a comfortable win for Letchworth but it was anything but.  During this Herts Presidents Cup final, hosted on the 4G pitch at Harpenden, the lead changed hands no fewer than 6 times and it was only in the final 10 minutes that Letchworth managed to pull away from an impressive Fullerians side.

It was Fullers who made the better start.  After only 2 minutes they had crossed the try line in the right corner but excellent pressure from the Letchworth defence meant the ball was dropped before being touched down.  However the Fullers attacks continued, and a few minutes later they were awarded a scrum in the Letchworth 22 by the right touchline from which the ball was spread left for a score in the corner for Fullers to take a 0 – 5 lead.  The difficult conversion was missed.

In the first 10 minutes Letchworth couldn’t get their hands on the ball until a great steal from hooker ‘Rambo’ Hughes at a breakdown allowed Letchworth to find their feet and they started to play some good rugby.  Within a couple of minutes of that Hughes turnover scrum half Harvey Howman made a great break from the base of a ruck and his offload allowed back rower Luke Mongston to stroll in for Letchworth’s first points, touching down just to the right of the posts.  Fly half Hem Johal added the extras to make it 7 – 5 to Letchworth.

Luke Campbell has played most of his rugby in the centre this season but injuries and unavailability has meant he’s found himself on the wing in recent games and he had a fine match, with his pace and power to the fore on numerous occasions.  A great break by Campbell down the left wing led to a promising attack but handling errors caused it to break down.  However the ref was playing advantage and called it back for a penalty to Letchworth which was kicked to the left corner.  The lineout was taken cleanly to set up an excellent maul by Letchworth who drove over the Fullers tryline and Hughes touched down for his first score.  The conversion from out near the left touchline was missed, so it was now 12 – 5 to Letchworth.

The Fullers kick at the restart did not go 10 so Letchworth were awarded a scrum on the halfway line.  Letchworth’s scrummaging was outstanding throughout the match, and when the ball came out it quickly went through the hands to winger Josh Dell who sprinted down the right wing before feeding full back Chris Gibbs with an inside pass, and Gibbs went over in the right corner with a Chris Ashton-esque swallow dive.  The extras couldn’t be added so it was now 17-5.  However Fullerians were by no means out of this match and after 23 minutes were awarded a penalty on Letchworth’s 22.  The points were added to bring the score back to 17-8.

A few minutes later and Letchworth were nearly in again.  Some great handling by back rowers Joe Allison and Mongston put Josh Dell away and, under pressure from the Fullers defence, his outstretched arm managed to dot the ball down but the ref disallowed the try, judging there had been a double movement.

With 33 minutes on the clock a Letchworth handling error led to a Fullers scrum near the halfway line.  From the scrum they quickly moved the ball right and went over in the corner.  The conversion was missed, just fading to the left of the posts, so the score was now 17 – 13.

It wasn’t long before Letchworth were again on the attack, but a grubber in the Fullers 22 was picked up by the Fullers winger who’s speed was a constant threat throughout the game.  He sprinted down the left wing before feeding the ball inside to a supporting player who touched down under the posts to ensure an easy conversion.  So Fullers now took the lead 17 – 20.

These two sides were providing fantastic entertainment for the large crowd, and though the half time whistle was imminent they weren’t finished yet.  Letchworth’s handling was outstanding for much of the match, and it was excellent handling that led to classy centre Michael Waters being fed the ball in the Fullers 22, and his evasive running took him one way and then the other to score under the posts.  With the extras added, Letchworth were now back in front at 24 – 20.  But still they weren’t finished!  A fine run by centre Arun Johal and a wonderful one handed offload by prop Oscar Robinson nearly produced another try but it wasn’t to be and the ref blew his whistle to bring a superb first half to a close.

The second half saw Gibbs move to scrum half and the introduction of Aman and Jai Johal to play alongside their cousins Arun and Hem.  Five minutes in to the half and Letchworth were awarded a penalty which was kicked to the corner, and from the resulting lineout first Hughes and then Mongston made great carries to gain valuable yards before Gibbs fed the excellent Arun Johal who dotted down in the right corner.  The difficult conversion couldn’t be made so it was now 29 – 20 to Letchworth.

Shortly after a great bullocking run by Campbell led to big second rower Adam Amos crossing the whitewash in the right corner, but the ref called it back for a forward pass earlier in the move.

The next 10 minutes or so were the scrappiest of the match, with neither side looking likely to score until a kickable penalty was awarded to Fullers which was taken to bring the score to 29 - 23.

Letchworth then had most of the possession and 20 minutes in to the half a promising attack was deep in to the Fullers half when the ball went loose.  Fullers picked up and, looking to counter attack, moved the ball right quickly.  The ball was then chipped ahead and was collected at full pace by their speedy right winger who went over for a great score.  A superb conversion meant that Fullers were now leading 29 – 30.

A head injury to Gibbs meant that he needed to leave the field and Harvey Howman was back on at scrum half.  A short time later Letchworth had a lineout in the right corner and, after an excellent carry by Mongston, Arun Johal crossed but was held up.

Letchworth were now starting to apply more and more pressure in the Fullers 22.   Another good move eventually saw the ball go to ground but Aman Johal was first to react, and he hacked it forward over the Fullers try line and followed up his own kick to dive on the ball for a fine score in the right corner.  The conversion was missed but Letchworth had now regained the lead at 34 – 30.

Excellent handling by Waters, Arun Johal and Howman produced another promising attack for which Letchworth were awarded a penalty after an infringement by Fullers.  The ball was kicked to the corner and the resulting catch and drive resulted in Hughes going over for his second.  The conversion was just missed to the left so the scoreline was now 39 – 30.

With 5 minutes to go Letchworth were awarded a penalty just inside the Fullerians half.  They decided to kick for goal and Jai Johal made a superb connection to add the 3 points to make it 42 – 30, a gap that meant it was now very unlikely that Fullers could catch them.

In fact it was Letchworth who would add to their score.  Man of the match ‘Rambo’ Hughes charged in to the Fullers 22 with the help of a dummy, and when he was brought down with a high tackle the ball went loose.  But it was picked up by Letchworth and whipped out to Josh Dell for a thoroughly deserved try in the right corner.  The extras couldn’t be added so the score was now 47 – 30, which is how it remained until the final whistle blew just a couple of minutes later to allow Letchworth players and supporters alike to celebrate as winners of the Herts Presidents Cup, a fitting way to finish a fantastic season.

Pictured above is Adam Amos lifting the Cup, generously applauded by the Fullerians team.